Difference between Hardware and Software 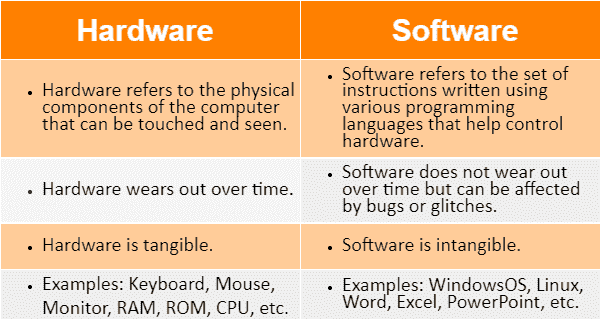 Before we compare hardware and software, let’s first understand both with their brief definitions:

Some hardware devices can be touched and seen directly, while others are assembled inside the computer case (called the CPU in general; however, it is not). Hardware devices or components are usually classified as
internal and
external Hardware, depending on whether we can see and touch such devices directly or indirectly. for example,
RAM
Is internal hardware while the keyboard is external hardware.

Software refers to a collection of data, instructions, programs, or rules that instruct a computer system or electronic components to work efficiently and achieve the desired outputs. Specifically, the software is developed using various programming codes and executed using a computer processor.

The software allows hardware devices to communicate and allows users to control inputs and outputs. It helps the hardware function of the computer. Also, the software can help users perform a specific task depending on the type of software. Google Chrome,
VLC, Word, Excel are some popular software examples.

Let us detail some of the main differences between hardware and software:

• The hardware usually wears out over time, while the software does not. But, the software can deal with bugs and glitches.

• Electrical hardware cannot be moved from one place to another, whereas software can be electrically transmitted with network access.

• It is known that the hardware only understands language at the machine level. In contrast, the software takes input in human-readable languages, then interprets it in machine-level language and sends it to hardware for further processing. 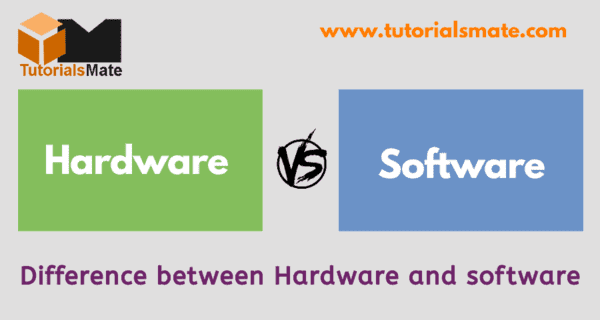 The difference between hardware and software

Let’s discuss the differences between hardware and software side by side using the following comparison table (in table form):

What is the main difference between hardware and software?

Understanding hardware and software with an example

System software, such as an operating system, creates an interface between the computer hardware and the user. The operating system controls all the basic functions such as hardware, memory management, process management, file management, management of I / O devices, etc. Using this interface, users can interact with hardware devices and give instructions to the system. Users can install specific application software to perform specific tasks such as
Photo editing, video processing, opening media files, etc.. 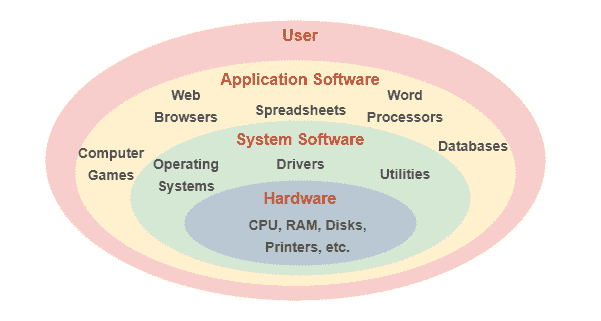 There are many examples of both hardware and software. However, we have discussed some of the most common below:

A wide variety of hardware is used in computers. Here are some key types of computer hardware:

• RAMRAM or random access memory is a type of hardware and acts as the main memory of the computer for the temporary storage of current data (or continuous data) so that it can be easily and quickly accessed by the processor. This volatile The memory and data stored in it are lost when the power supply is disconnected.

• ROM: ROM or read-only memory is a
Not volatile A volume that stores essential computer data such as firmware. The data stored on the ROM is read-only and almost impossible to modify by the user. It saves the stored data even after the power is turned off. It gives read access to the computer’s processor to write / load boot data and system files to the main memory.

• ProcessorA: The CPU or central processing unit is called the computer’s brain. This is one of the main components of a computer system and includes the
Control Unit (CU) And
Arithmetic Logic Unit (ALU). It processes instructions and handles other computer calculations and logical operations. CPU is also known as CPU, CPU, Microprocessor and Chip.

• Motherboard: The motherboard is the main one
Printed circuit board (PCB) In a computerized system. It typically presses on most important computer components, including CPU, RAM, ROM, connectors, and ports for input, output, and storage devices. It is assembled inside a computer case along with other electronic chip components.

• Keyboard mouseA: These are the main input devices that allow users to enter data into a computer system. The keyboard consists of a number of keys that help to enter alphabet letters, numbers, symbols and other information. The mouse acts as a pointing and clicking device, which helps move the cursor and select specific objects on the computer screen (also called
Screen). 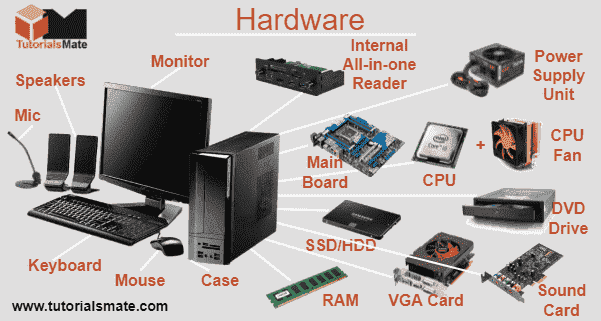 The image above shows hardware or other popular components.

Computers use a wide variety of software. Here are the two main types of software on your computer that can be used to categorize all software: 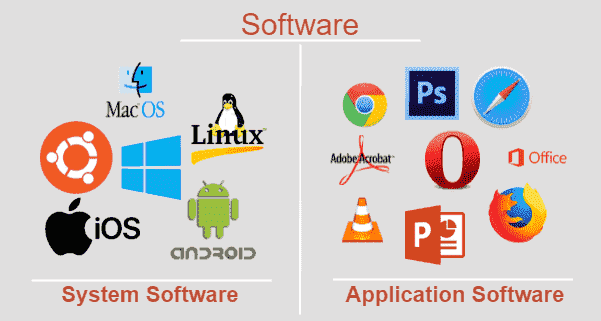 The image above shows some popular system and application software. there is much more.