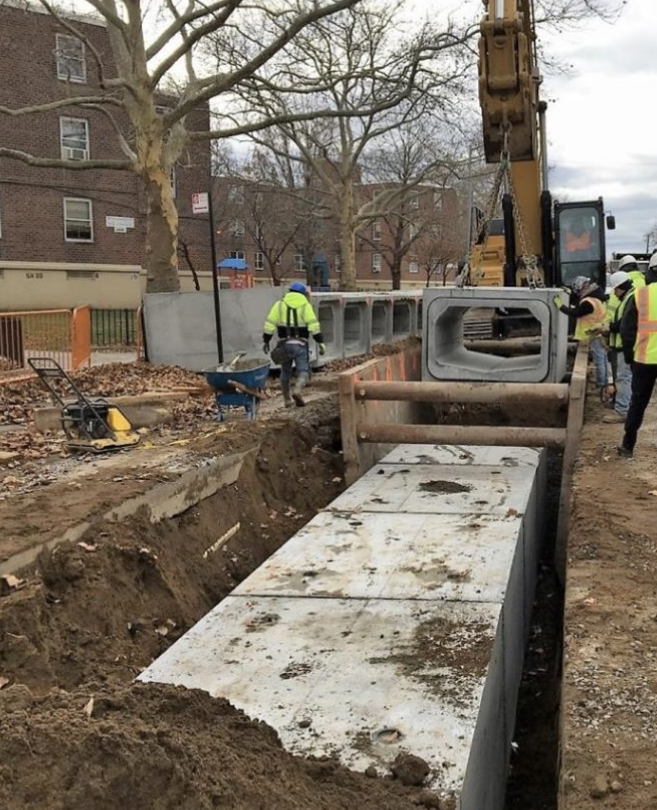 The New York Department of Environmental Protection (DEP) Commissioner Rohit T. Aggarwala and NYC Department of Design and Construction (DDC) Commissioner Thomas Foley today announced the completion of the $ 148 million, three-phase program to reduce street flooding, ensure the reliability of the drinking water delivery system, improve the health of Fresh Creek and Jamaica Bay and make neighborhood roadways safer for all users. DEP provided the funding for the project while DDC managed the construction.

“No New Yorker should have to cross their fingers and hope their street or home does not flood when
they see rain clouds, ”said New York City Mayor Eric Adams. “This $ 148 million investment in 15 miles
of new sewers and water mains for Southern Brooklyn will reduce flooding, protect our drinking water,
and improve quality of life. We know that environmental justice begins on the ground, and through
projects like these we will build a safer and more resilient city for all New Yorkers. ”

“What better day than Earth Day to celebrate a $ 148 million investment in Southern Brooklyn where we
have separated what were previously combined sewers in Canarsie and East New York and created
additional capacity in the drainage system that will result in less flooding and a significant reduction in
overflows into Fresh Creek – big wins for the community and the environment, ”said the NYC Department
of Environmental Protection Commissioner Rohit T. Aggarwala.

“This large program in Canarsie and East New York will greatly improve the quality of life for residents
with reduced street flooding and improved water infrastructure reliability, ”said the NYC Department of
Design and Construction Commissioner Thomas Foley. “All of the streets that were impacted
throughout construction received new roadways, sidewalks and curbs to direct the stormwater to the
new storm sewers and mitigates damage to property owners. ”

“New York City is enhancing resiliency, protecting residents, and improving water quality through this
significant infrastructure investment, ”said the NYS Department of Environmental Conservation
Commissioner Basil Seggos. “NYS DEC congratulates NYC DEP and DDC on completing this major project that is part of the Long-Term Control Plan to address combined sewer overflows in Southern Brooklyn, and we look forward to continuing to work together to mitigate flooding and other impacts of climate change in communities throughout the region. ”

Significant investments in infrastructure lead to significant improvements in quality of life for all
Brooklynites, ”said Brooklyn Borough President Antonio Reynoso. “This $ 148-million investment in
Canarsie and East New York will not only improve waste management and secure clean drinking water
for community members, but it’ll also intercept flood events that are becoming more common due to
climate change. We thank our partners at DEP and DDC for this necessary infrastructure investment. ”
“These 6.5 miles of new sewers throughout Eastern New York and Canarsie will prevent flooding in homes
and in our streets, not to mention keeping 189 million gallons of overflow from entering Fresh Creek and
Jamaica Bay, ”said State Senator Roxanne J. Persaud. “Completion of this project marks a significant
step toward resiliency. ”

“While it has been nearly a decade since Superstorm Sandy, many New Yorkers continue to feel its
devastating effects, especially the communities in Canarsie and East New York. The Jamaica Bay area
remains vulnerable to extreme weather events, ”said Congress Member Hakeem Jeffries. “I thank the
NYC Departments of Environmental Protection and Design and Construction and the NYS Department of Environmental Conservation for their work in completing new sewers in our low-lying neighborhoods to ensure we are prepared for future storms. This project will not only reduce street flooding, but it
will further the reliability of the drinking water delivery system and improve the health of Fresh Creek
and Jamaica Bay. ”

“I am truly delighted to join the DEP and DDC to celebrate the completion of the $ 148 million
infrastructure project to help mitigate street flooding in Canarsie and improve the health of Fresh
Creek, ”said Council Member Mercedes Narcisse. “Sewers are not usually cause for celebration, but

Canarsiens, like myself, who endured Superstorm Sandy and subsequent large rain storms, will surely be delighted to know the area now has 6.5 miles of new storm sewers. This project should go a long way to improve the quality of lives of residents in the neighborhood, and hopefully help make flooded streets and basements a thing of the past. ”

“This is an important infrastructure investment in East New York and Canarsie. Flooding and sewer
backups have caused homeowners, tenants and small businesses problems in the past, ”said Assembly
Member Nikki Lucas. “The $ 148 million investment is a win for the residents and small business owners
of East New York and Canarsie and a start to bringing the community into the 21st Century with much
needed infrastructure upgrades. I look forward to working with DEP and DDC on other infrastructure
programs throughout Eastern New York and the Canary Islands. ”

To better capture stormwater and direct it to the new storm sewers, 176 catch basins were installed.
Alongside the new sewers, 8.3 miles of new ductile iron distribution water mains were built to replace
the older cast iron pipes, ensuring a reliable supply of high-quality water for decades to come. Fire
protection was enhanced with the installation of 128 fire hydrants to ensure that the FDNY has ready
access to the City’s water supply. As part of the final restoration, all impacted roadways, sidewalks and
curbs were reconstructed.

In addition, the wetland in the Fresh Creek Basin Nature Preserve was restored. The saltmarsh cordgrass habitat was graded and expanded in accordance with a design that was developed with the NYC Department of Parks and Recreation. Fill, debris, invasive species and other ecological impairments were removed to create nearly 30,000 square feet of restored wetlands in two wetland zones comprised of 21,200 square feet of intertidal marsh and 8,000 square feet of high marsh. Plantings to compliment the saltmarsh cordgrass include saltmeadow cordgrass, spikegrass, and black grass rush. Nearly 34,000 square feet of coastal forest was created to enhance the overall ecology of the preserve.
Altogether, the three phases cover an approximately 419-acre drainage area and reduce combined
sewer overflows into Fresh Creek, a tributary of Jamaica Bay. The increased collection of stormwater

runoff reduces roadway and property flooding and separates out an estimated 50 percent of the
stormwater flow from the combined sewers. By reducing pressure on the existing combined sewer
system, modeling shows that overflows into Fresh Creek will be reduced by approximately 189 million
gallons annually. This project is part of an agreement between New York City and the New York State
Department of Environmental Conservation that aims to significantly improve the health of New York
Harbor.