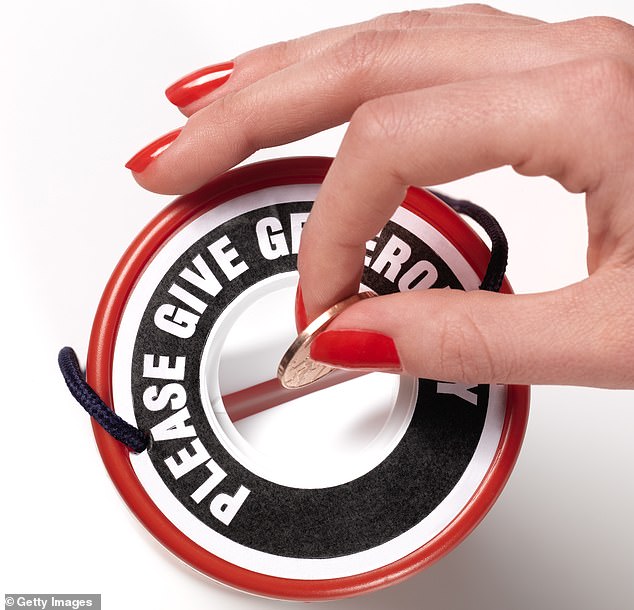 Many derive an income from their investments – as well as, of course, from fundraising. And they’re big players: investments for the UK’s charity sector are worth a massive £ 120billion.

Those who manage money on behalf of charities are experts in producing a reliable income through turbulent markets. If they do not, it jeopardises the ability of the charity to fund their good work year in, year out.

Helping hand: Those who manage money on behalf of charities are experts in producing a reliable income through turbulent markets

Charities are also professionals in making their money go as far as possible in difficult economic times as this tends to be when their help is more needed than ever.

And while many individual investors have only recently been thinking about how to invest in a way that sits comfortably with their beliefs, charities have been doing it for years.

While some charities invest their funds themselves, most seek the expertise of some of the country’s biggest investment fund houses, including Cazenove, Abrdn, M&G, Investec and Barclays. These all have special teams dedicated to helping them make the most from their investments.

Here are five lessons that ordinary investors can learn from those who manage money on behalf of charities.

1) Over the long term inflation, not volatility, is your biggest risk

Many charities rely on their investments to produce an annual income that they can then spend on carrying out their work.

They also need to put inflation management at the very heart of their investment strategy – otherwise the value of their funds erodes over time. Ordinary investors are waking up to the dangers of inflation as it edges towards double-digit figures. But they could learn a lot from how charities attempt to counter it.

Kate Rogers, head of sustainability at investment company Cazenove, which invests for around 1,650 charities – as well as being a trustee of a number of them. She explains: ‘Charities want to spend their money on their beneficiaries, but they need to do that today, tomorrow and the next day – sometimes for many decades. After all, many of the issues that they address, such as poverty and disease, are likely to be around for years to come. ‘

Cazenove provides a range of investment funds for charities, all of which focus on inflation-busting. ‘We do this by seeking out investments that have inflation protection at their core,’ says Rogers.

She adds: ‘This will often include property where landlords can pass on inflation through rising rents. We also look to invest in quality companies whose businesses are sheltered from inflation because they produce goods or services that customers continue to buy even when prices rise. ‘

Charities need to be able to spend every year – even when stock markets are falling. In fact, their services are often in greatest demand during difficult economic times.

But they also need to avoid having to sell investments at the wrong time. So they will often have good cash reserves that they can draw on to help fund their work.

Ordinary investors could benefit from the same approach. As a rule of thumb, investors are often told to have the equivalent of around three months of outgoings in a savings account as a buffer. But investors who are living on their investments may want to have considerably more than this, so they can live on their cash reserves for a while if necessary and do not have to sell funds in a falling market.

But as millions of investors think about the impact of their investments for the first time, many are realizing that it is not straightforward. That is because we each have our own definitions of what we consider ‘responsible’ or ‘ethical’. Investing responsibly is therefore not just a matter of picking funds with a responsible label.

It requires looking under the bonnet of a fund to see what the holdings are – and thinking deeply about what you are happy to invest in and what you are uncomfortable with. Not an easy task. However, it is a conundrum that charities have been tackling for years and there is plenty we can learn from the strategies they employ.

Nicola Toyer is head of charities at wealth manager Investec, which manages funds for 1,100 charities. She says most charities formulate an investment policy, which clearly lays out what they are prepared to invest in and why – and what they wish to avoid.

She says: ‘For example, a charity that focuses on health issues may not want to invest in companies that profit from tobacco. Another charity with an environmental focus may not invest in fossil fuel companies. ‘

Ordinary investors can do the same by setting out what investments they are comfortable holding – and those they wish to avoid. They can then seek out the funds that fit the bill.

Like charities, investors may find there are some areas they would like to exclude altogether from their portfolio, while being more relaxed about other sectors.

Toyer adds: ‘Some charities state that only a small proportion of a company’s income can be derived from an activity they do not wish to support. That means that if they do not want to support tobacco, they may rule out cigarette companies as permitted investments, but not the supermarkets that sell them. ‘

Charities were among the first to realize that they could use their investment power to further their causes. They will often use their muscle as big shareholders in large companies to speak up at annual meetings and vote on issues that matter to them.

But ordinary investors have as much power to do this as even the largest charities – all shareholders in a company get a vote, even if they have just one share.

Anyone who holds shares in a listed company or investment trust can vote and attend the annual meeting. Those who hold investments through a wealth platform can ask the provider to send them information on how to vote.

People who hold investments through a fund – a unit trust or open-ended investment company – can lobby the fund manager to speak up on their behalf.

5) For a reliable dividend income, you have to think long term

Charities rely on dividend payments from their investments to help fund their activities. But they need to be sustainable. That’s why the investment funds that they favor tend to seek out not just the best dividend payers, but also those that show growth potential.

Michael Stiasny manages M&G Charifund which has been investing for charities for 62 years. The fund delivers an income equivalent to 5 per cent, compared to 3.5 per cent from the FTSE All-Share Index of UK-listed companies.

He says: ‘We look for companies we think have the potential to grow their dividend.’

Stiasny cites pharmaceutical company GSK and chemicals business Johnson Matthey as two examples. ‘Johnson Matthey’s share price dropped early last year, which pushed its dividend up to the equivalent of four per cent a year. We bought in and now shares have recovered. ‘

James Budden, director of marketing and distribution at Baillie Gifford, says: ‘The funds offer regular resilient income from a range of companies that are growing and investing in their businesses over the long term. The approach of these income funds differs from many others which simply focus on prevailing high-yield companies. ‘

Some links in this article may be affiliate links. If you click on them we may earn a small commission. That helps us fund This Is Money, and keep it free to use. We do not write articles to promote products. We do not allow any commercial relationship to affect our editorial independence.