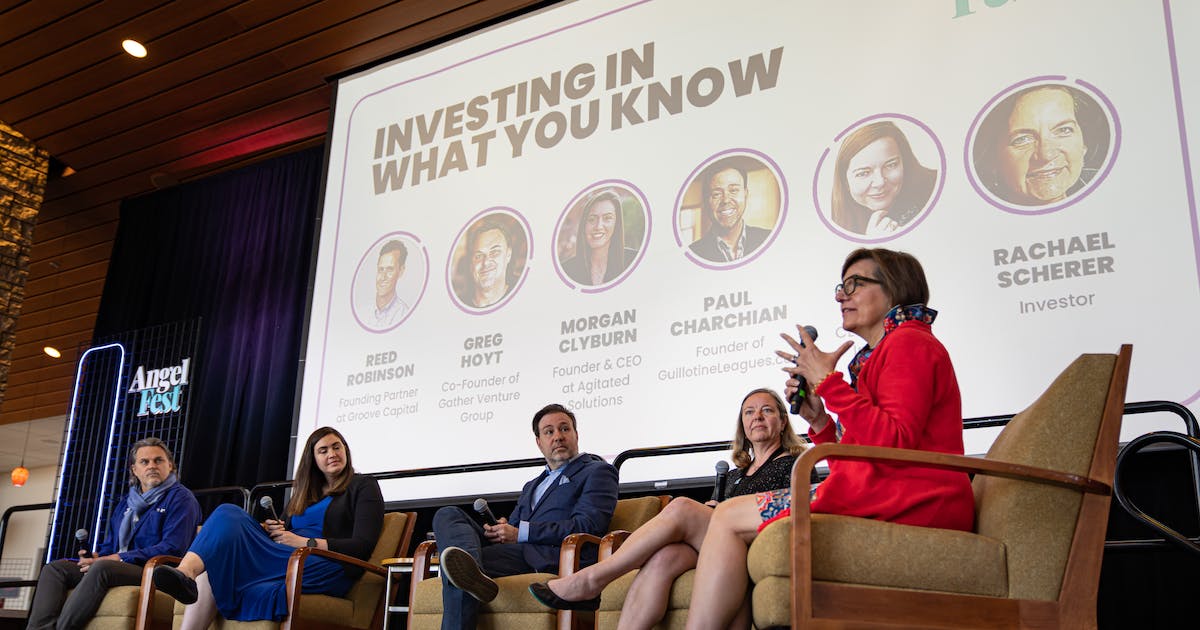 When Monique Maddox decided to start investing in early-stage companies, she was not sure where to turn. She sought the advice of the few people she knew who had done the same on how to proceed.

What the chief executive and founding principal of Minneapolis-based Macrame Technologies found was that it takes a lot of time and research to develop a strategy and then find companies that are a right fit.

Maddox is what’s called an angel investor – someone who invests in early-stage companies, sometimes before they produce any revenue. At that point, there’s hardly a guarantee that a company will produce a return, which is why it’s easier to find investors when a company is further along in development.

“It’s like looking for a job,” Maddox said during the recent Angel Fest, a one-day conference on angel investing organized by Minneapolis early-stage investment firm Groove Capital. “If you want to work for a company based in London, there are very few people here that have contacts into that company in London.”

Maddox, who started investing in 2015, learned she had to be intentional, and she advises those interested in angel investing to do the same. She immersed herself in the Twin Cities startup ecosystem, attending every pitch competition she could.

She then decided to make a concerted effort to invest in companies owned by women and people of color. These companies make up at least 70% of her angel investment portfolio.

Other investors at Angel Fest said the right connections are only part of the equation. They recommended hiring a financial adviser and becoming educated on terminology and federal laws around investing.

While it’s work – and there’s the promise of possible financial return – they also said there is satisfaction in backing new ideas that can potentially improve the lives of other people and supporting entrepreneurs on their journeys.

Know if you can be accredited

Privately owned business can raise capital in a number of ways, including selling equity, but some investment opportunities require that a person to be an accredited investor, which requires net worth of $ 1 million or more, plus individual income of over $ 200,000, or joint income of $ 300,000, for the past two years.

Being an accredited investor also allows you to apply for the Minnesota Angel Tax Credit program, which provides a 25% credit to investors or investment funds that make equity investments in Minnesota startup companies. The maximum credit is $ 125,000 per person, per year ($ 250,000 if filing jointly).

However, there are only so many credits available. As of May 27, the program had run out of money for the year, so the state stopped accepting applications. Legislation proposing $ 7 million of additional funding was in Minnesota’s omnibus tax bill, which was not passed before the 2022 legislative session adjourned.

Invest in what you know

Diane Rucker, an angel investor in the Twin Cities with an extensive background in health care, life sciences and technology, bases her investments on evaluating the innovations.

“There are nonprofits that I can and will invest in, but I wanted to do something even more tangible and really put some seed money where people who can make amazing things were starting to make innovations that we need to recover and rebuild,” Rucker said .

“Yes, you’re investing for a financial return, but every dollar is actually going toward a meaningful cause,” Evans said. “You’re solving some sort of problem, you’re helping people, often saving lives. It’s not impact investing, per se, but at least from my lens, it feels good to know you’re helping and making a return as well . “

For Greg Hoyt, owner of Rustica Bakery in Minneapolis, food is his focus. He has made 15 deals since 1996.

“I want to be part of things that are moving forward and exciting,” Hoyt said. “Economically, food is super vibrant.”

Investor Paul Charchian, founder of Guillotine Leagues, operates in the fantasy sports and online gaming industry. For 12 years, he was president of the 400-member Fantasy Sports & Gaming Association, plugging him into fantasy sports, gaming and gambling. All seven of his investment deals are in sports or payment-focused companies, he said.

“You had the opportunity to be immersed in the ecosystem,” said Charchian, who has completed seven deals in seven years.

Think about what you bring to the deal

In the past year, Rachel Scherer, a former executive at Medtronic, made six investment deals, all in medical technology companies or women-led companies. While investments in previous companies were strictly financial, she said that at this point in her career she enjoys seeing entrepreneurs flourish.

That means Scherer brings her knowledge of running a business to the table. She can be more of a mentor and use her network to help the company grow.

“That is what makes it fun for me,” she said.

That network could include other investors, Evans said.

“Share your Rolodex of other investors to bring individuals together to make that business more successful,” she said.

Steer of Tundra Ventures said investors also can help equal the playing field in the startup world. Historically, women and entrepreneurs of color receive a small percentage of the billions of dollars in investment capital being disbursed annually across the US

“There are no shortages of entrepreneurs who look like the emerging majority of America,” Steer said.

Do your due diligence

Do not be afraid to ask the hard questions. Hoyt said he wants to know why the person started the company, which provides insight into the direction of the company.

Evaluating communication styles and how transparent a company’s executive team are also crucial, said others at Angel Fest. So is how other people view the founder.

Basic research should include finding out if there are any lawsuits against the company or the founder, and learning more about the market. For example, is there too much competition in the field? Is it large enough to get a good return for your dollar?

If you’re not sure what to ask, go to your network and find out.

There’s no guarantees when it comes to investing, but early-stage investing is a bigger risk than other options. Startup founders are still figuring out their business model.

Do not give in to pressure that a financing round is closing. Instead, set goals and pace yourself to reach milestones that you set, Maddox said.