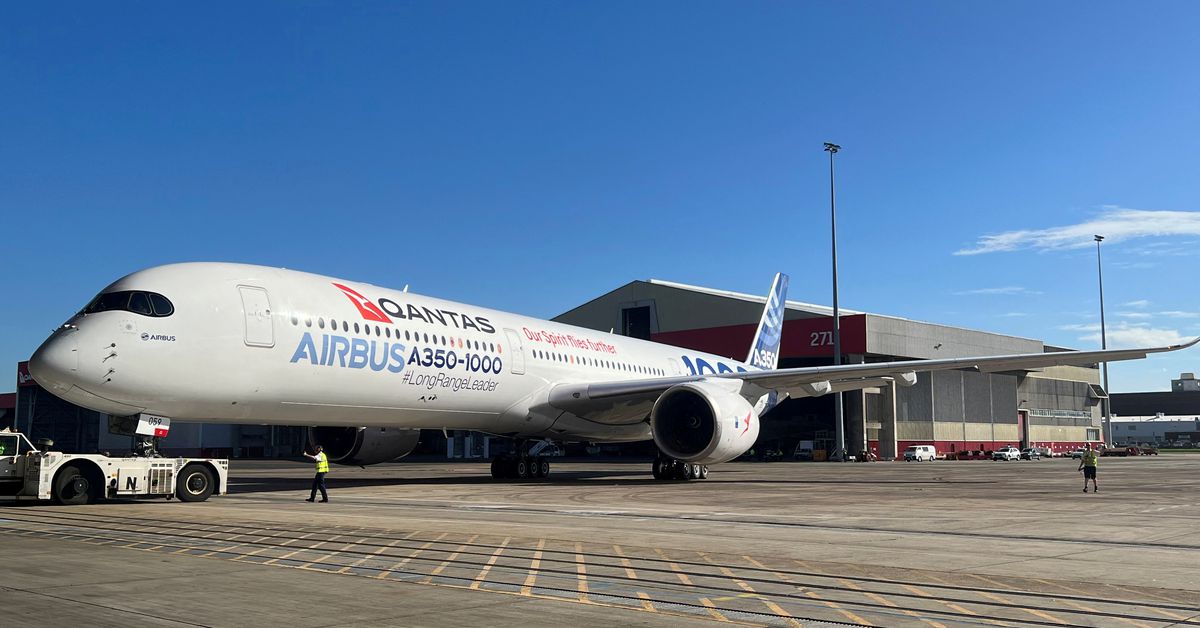 An Airbus A350-1000 test plane arrives at Sydney Airport as the backdrop for Qantas announcing an order for 12 of the planes in Sydney, Australia May 2, 2022. REUTERS / Jamie Freed / File Photo

DOHA, June 19 (Reuters) – Qantas Airways (QAN.AX) and Airbus (AIR.PA) said on Sunday they would invest up to $ 200 million to accelerate the development of a sustainable aviation fuels (SAF) industry in Australia to help meet the airline’s goal of lowering carbon emissions.

The agreement, announced on the sidelines of global airline industry body IATA’s annual meeting in Doha, is in line with Qantas’ target of using 10% SAF in its fuel mix by 2030 and comes after it placed a multi-billion dollar order for Airbus narrowbody and widebody planes last month. read more

The global airline industry, aiming to reach net zero emissions by 2050, is relying on SAF usage to rise from around 100 million liters (26 million gallons) a year in 2021 to at least 449 billion liters a year within three decades, a mammoth and costly undertaking.

With no commercial-scale sources in Australia, Qantas is sourcing SAF in London and Los Angeles.

“This investment will help kickstart a local biofuels industry in Australia and hopefully encourage additional investment from governments and other business and build more momentum for the industry as a whole,” Qantas chief executive Alan Joyce said in a statement.

The investment, which includes A $ 50 million ($ 35 million) of funding previously committed by Qantas, could go to a mix of start-up firms and more established operators, the airline said.

“It makes a lot of sense for us to put equity into an industry that we will be the biggest customer of,” Joyce said. “We’re calling on other companies and producers to come forward with their biofuel projects.”

Airbus chief executive Guillaume Faury said the increased use of SAF would be a key driver of the aviation industry’s aim to reach net zero emissions by 2050.

“But we can not do this without viable industrial systems to produce and commercialize these energy sources at affordable rates and near to key hubs around the world,” he said.

“This is especially true for a country like Australia, which is geographically distant and highly reliant on aviation to remain connected both domestically and internationally.”

The SAF investment partnership will last for an initial five years with an option to extend, the companies said.

Reporting by Jamie Friday in Doha; Editing by William Mallard