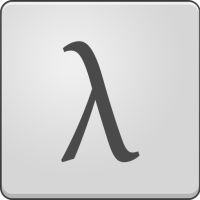 The Learning With Errors problem is the basis of a few cryptosystems, and a foundation for many fully homomorphic encryption (FHE) schemes. In this article I’ll describe a technique used in some of these schemes called modulus switching.

In brief, an LWE sample is a vector of values ​​in for some

. Modulus switching allows one to convert an LWE encryption from having entries in

to entries in some other

ie, change the modulus from

The reason you’d want to do this are a bit involved, so I will not get into them here and instead back-reference this article in the future.

Briefly, the LWE encryption scheme I’ll use has the following parameters:

An LWE secret key is defined as a vector in

(uniformly sampled). An LWE ciphertext is defined as a vector

and all arithmetic is done modulo

Without the error term, an attacker could determine the secret key from a polynomial-sized collection of LWE ciphertexts with something like Gaussian elimination. The set of samples looks like a linear (or affine) system, where the secret key entries are the unknown variables. With an error term, the problem of solving the system is believed to be hard, and only exponential time / space algorithms are known.

However, the error term in an LWE encryption encompasses all of the obstacles to FHE. For starters, if your message is

and the error distribution is wide (say, a standard deviation of 10), then the error will completely obscure the message from the start. You can not decrypt the LWE ciphertext because you can not tell if the error generated in a particular instance was 9 or 10. So one thing people do is have a much smaller cleartext space (actual messages) and encode cleartexts as plaintexts by putting the messages in the higher-order bits of the plaintext space. Eg, you can encode 10-bit messages in the top 10 bits of a 32-bit integer, and leave the remaining 22 bits of the plaintext for the error distribution.

Moreover, for FHE you need to be able to add and multiply ciphertexts to get the corresponding sum / product of the underlying plaintexts. One can easily see that adding two LWE ciphertexts produces an LWE ciphertext of the sum of the plaintexts (multiplication is harder and beyond the scope of this article). Summing ciphertexts also sums the error terms together. So the error grows with each homomorphic operation, and eventually the error may take over the message, at which point decryption fails. How to deal with this error accumulation is 99% of the difficulty of FHE.

Finally, because the error can be negative, even if you store a message in the high-order bits of the plaintext, you can not decrypt by simply clearing the low order error bits. In that case an error of -1 would result in a corrupted message. Instead, to decrypt, we round the value

to the nearest multiple of

, where $ k $ is the number of bits “reserved” for error, as described above. In particular, decryption will only succeed if the error is small enough in absolute value. So to make this work in practice, one must coordinate the encoding scheme (how many bits to reserve for error), the dimension of the vector

and the standard deviation of the error distribution.

With a basic outline of an LWE ciphertext, we can talk about modulus switching.

Start with an LWE ciphertext for the plaintext

(all that has changed is I’ve put a prime on all the terms to indicate which are changing, most notably the new modulus

Failed attempt: why not simply reduce each entry in the ciphertext vector modulo

. Despite the fact that this operation produces a perfectly valid equation, it will not work. The problem is that taking

destroys part or all of the underlying message. For example, say

then the message is a multiple of

For this reason, we can not hope to perfectly encrypt

at all. Rather, we can only hope to encrypt something like “The message

stored in lower order bits than

originally used. ” In more succinct terms, we can hope to encrypt

. Indeed, the operation of

many bits (temporarily exceeding the maximum allowable bit length), and then shifting down by

For example, say the number

which stores the same underlying number

, but in the top three bits of a 10-bit message. In particular,

Side note: because of this change to the cleartext-to-plaintext encoding, the decryption / decoding steps before and after a modulus switch are slightly different. In decryption you use different modules, and in decoding you round to different powers of 2.

So the trick is instead to apply

use the entire space of bits in the plaintext, this transformation will not necessarily result in an integer. So we can round the result to an integer and analyze that. The final proposal for a modulus switch is

Because the error growth of LWE ciphertexts permeates everything, in addition to proving this transformation produces a valid ciphertext, we also have to understand how it impacts the error term.

The statement summarizing the last section:

be an LWE ciphertext encrypting plaintext

(where rounding is performed entrywise) is an LWE encryption of $ m ‘= m q’ / q $, provided

Proof. The only substantial idea is that

. This is true by the definition of rounding, but that particular way to express it allows us to group the error terms across a sum-of-rounded-things in isolation, and then everything else has a factor of

that can be factored out. Let’s proceed.

. need to show that

is a soon-to-be-derived error term.

and using the “only substantial idea” above, we get

with magnitude at most

. Continuing to expand, and noting that

is related to the

Because we’re switching modules, it makes sense to rewrite this over the integers, which means we add a term

and continue to expand

Define the square bracketed term as

and we have proved the theorem.

The error after modulus switching is laid out. It’s the original error scaled, plus at most

. However, note that this is larger than it appears. If the new modulus is, say,

bit left for the message. This is not altogether unrealistic, as production (128-bit) security parameters for LWE put

around 600. But it is compensated for by the fact that the secret

is chosen uniformly at random, so in expectation only half the bits will be set. In other words, the error is more like

and you can bound the probability that the error exceeds, say,

using standard probabilistic arguments. That gives you a few extra bits to work with.

How to organize email testing in PHP?