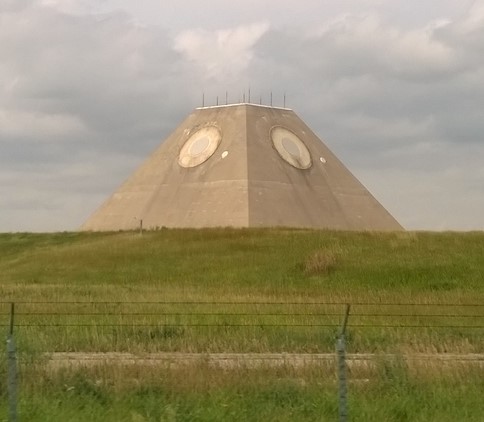 An abandoned Cold War-era military installation in Nekoma, North Dakota, will be developed into a secure data center for high-performance computing and data processing, under an agreement announced by the governor.

According to Gov. Burgum, Bitzero has signed an agreement with the Cavalier County Job Development Authority to acquire and redevelop the historic Stanley Mickelsen Safeguard Complex, commonly known as “The Pyramid.”

Waste heat captured from the data center’s servers will be used to heat an on-site greenhouse. The company also plans an interpretive center and additional community engagement at the site, representing a total investment estimated by Bitzero at $500 million, according to the governor’s office.

Burgum says Bitzero’s bid for the site was delivered with a comprehensive Zero Carbon Displacement energy strategy, meaning the facility’s carbon footprint will be offset with the use of renewable energy sources.

Bitzero announced in June that the company had selected North Dakota for its headquarters and hub for all North American operations, with plans to build 200 megawatts of data centers in the next two to three years, as well as a graphene battery assembly and distribution hub.

Bitzero plans to develop the abandoned Cold War-era military installation into a highly secure data center for high-performance computing and data processing. Waste heat captured from the data center’s servers will be used to heat an on-site greenhouse, and the company is also planning an interpretive center and additional community engagement at the site, representing a total expected investment estimated by Bitzero at $500 million.

“This is fantastic news for Cavalier County and our entire state, putting this iconic pyramid on the prairie to innovative use and further solidifying North Dakota’s status as a global hub for data center development,” Burgum said. “We are deeply grateful for Bitzero’s significant investment in our state and for the tireless efforts of the North Dakota Department of Commerce and Cavalier County Job Development Authority to secure a viable tenant and seize the potential of this historic structure. This important piece of history will be restored and become a beacon for North Dakota innovation to the rest of the world.”

“The announcement from Bitzero to purchase ‘The Pyramid’ is a great leap forward for North Dakota,” said Josh Teigen, director of Commerce’s Economic Development and Finance Division. “North Dakota leads the world in a variety of verticals whether it is our robust tech sector, autonomous farming or unmanned aircraft systems, and expanding highly secure data center infrastructure in our state will help support all industries and diversify our economy. Bitzero’s announcement also brings together two pillars of our economy, energy and agriculture, as all waste heat from the data center will be used in an on-site greenhouse to enable North Dakota to grow crops year-round and help feed the world.”

Bitzero’s bid for the site was delivered with a comprehensive Zero Carbon Displacement (ZCD) energy strategy, meaning the facility’s carbon footprint will be offset with the use of renewable energy sources. The CCJDA Board of Directors voted unanimously on July 18 to accept Bitzero’s bid proposal after a presentation from Bitzero CEO Akbar Shamji.

“We in Cavalier County have taken great efforts to preserve and maintain this site with clear intentions: to use the infrastructure along with the county’s abundant resources to create jobs and to restore dignity to the history here,” said Carol Goodman, a consultant to the CCJDA for the Stanley R. Mickelsen site redevelopment. “We have had bids and interest in the site in the past, but none came with a track record and a strategy that we could trust to meet our objectives. We look forward to supporting Bitzero and watching our collective ambitions become a reality.”

Shamji and Bitzero strategic investor Kevin O’Leary announced in June that the company had selected North Dakota for its headquarters and hub for all North American operations, with plans to build 200 megawatts of data centers in the next two to three years, as well as a graphene battery assembly and distribution hub.

Total expected investment into the Nekoma site to bring it to completion, including the perfection of zero carbon displacement power generation and supply, is estimated at approximately $500 million, according to Bitzero. Shamji said the resulting job creation – the site is expected to employ 35 to 50 people when operational – and economic benefit to the county and state will be very visible and are a testament to the State of North Dakota’s vision and leadership in energy transition and carbon emission reduction strategies.

“The history of this site and the integrity of the community and leadership we have met here in Cavalier County are a marvel,” Shamji said. “The Pyramid when correctly understood is a monument to peace. The extraordinary capacity of the site in its first incarnation was a direct catalyst to the peace treaties of 1975 and the end of the Cold War. In its new incarnation the site will reappear again as a beacon for change in the now biggest challenge we face as society, climate change. The use of existing unused resources and ZCD energy at this site will guide the global data center industry and its stakeholders. Be they developers, users or shareholders, The Pyramid Data Center will demonstrate for all concerned the increased functionality, lower cost of capital and higher profitability from harnessing natural energy and working in tandem with local communities and leading minds when approaching data services.”

More than 1,000 workers came to Nekoma in the 1970s to build the Stanley R. Mickelsen Safeguard Complex, the centerpiece being the huge concrete pyramid with its 3-foot-thick walls and the supporting towers that remain on the landscape. As part of the US nuclear defense system during the Cold War, the site once controlled anti-ballistic missiles. It became operational in April 1975 but was shuttered after only eight months, as Congress voted in October 1975 to deactivate the complex. The CCJDA has owned the site’s tactical area – the pyramid, adjoining underground power plant and missile field – since 2017.