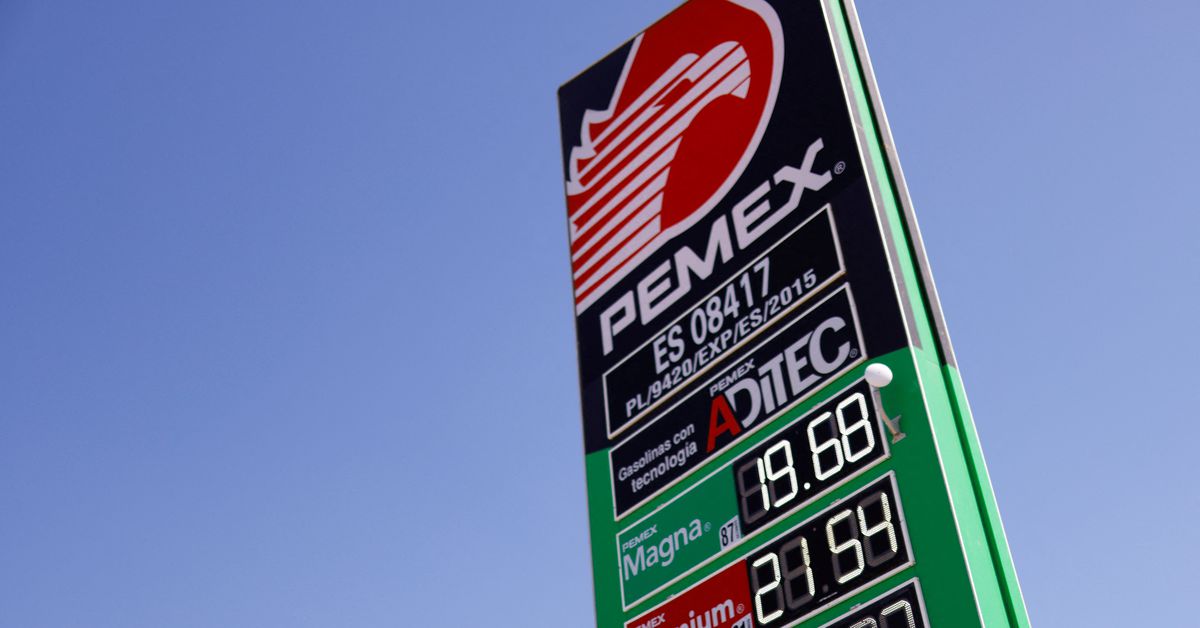 A sign of state-owned company Petroleos Mexicanos (PEMEX) shows their prices of the gasoline at a service station after Mexico suspended a week of gasoline subsidy along the US border, in Ciudad Juarez, Mexico April 2, 2022. REUTERS/Jose Luis Gonzalez

MEXICO CITY, July 29 (Reuters) – Petroleos Mexicanos (Pemex) is ready to invest billions of dollars in a disputed major Gulf of Mexico oilfield once its US partner Talos Energy accepts Pemex will run the project, the chief executive of the Mexican state oil company said.

The 850-million-barrel Zama field has become a bone of contention under President Andres Manuel Lopez Obrador’s efforts to strengthen state control of energy.

Majority stakeholder Pemex has had a lengthy standoff over who should operate it with Talos, which leads a private consortium that also includes Harbor Energy (HBR.L) and Wintershall Dea (INT.UL). It has reached the point where the Mexican and US governments have had to mediate.

“They (Talos) are still a bit reluctant. We hope they’ll finally accept, and that we can get the project started,” Pemex Chief Executive Octavio Romero told Reuters in an interview at the company’s Mexico City headquarters.

The other two companies in the consortium agreed with Pemex on the need to proceed, according to the executive. Pemex has said it must operate the project because of its experience, its larger size and because its section of the block holds most of the reserves.

Talos has a 17.35% stake in Zama after the project’s unitization. It wants to have a say on how to develop the reservoir, which is regarded as one of the top prospects in shallow waters worldwide.

Talos (TALO.N) in September filed notices of dispute under the United States-Mexico-Canada (USMCA) trade agreement, a prelude to seeking international arbitration. Reuters reported in May that Talos had paused the action during high-level talks. read more

Talos won the right to develop the lucrative field in an auction held under the previous government.

Lopez Obrador’s administration has frozen oil and gas auctions. His drive to favor Pemex and the national power utility culminated last week in the United States requesting dispute settlement talks with Mexico over its energy policy under the USMCA. read more

Pemex has not publicly disclosed its stake in Zama. According to an independent analysis of the reservoir, 50.43% of Zama’s reserves are on Pemex’s side.

“Pemex must take into account the companies’ exploration expenses and bring fresh investment into the project,” said Mexico City-based analyst Gonzalo Monroy. “That is especially true since Pemex wants to add two more fields to the project, which would increase assets but also the need for investment, and could atomize the other companies’ stakes.”

Asked whether Pemex has the means to develop Zama, Romero firmly agreed and pledged to invest “whatever it takes.” Investment in the field this year would be “very little” but would ultimately encompass “billions of dollars”, he added.

The state oil firm has financial debts of $108.1 billion and $13.7 billion with suppliers, alongside other commitments that have persistently saddled it with negative working capital.

The investments Zama requires in the coming years will coincide with a hefty debt repayment schedule.

“Pemex has not yet planned investment for Zama in its budget, its capital expenses continue to be limited and the government is using the company’s extraordinary revenue to support subsidies, boosting the president’s popularity,” said John Padilla, consultancy IPD Latin America’s managing director.

If the parties reach a final agreement this year, investment for 2024 would be higher, Romero said, adding that Lopez Obrador made a firm commitment on Zama during energy sector meetings between Mexican and US officials in May and June.

Lopez Obrador in June said that Mexico and Talos were close to reaching a deal on developing the field.