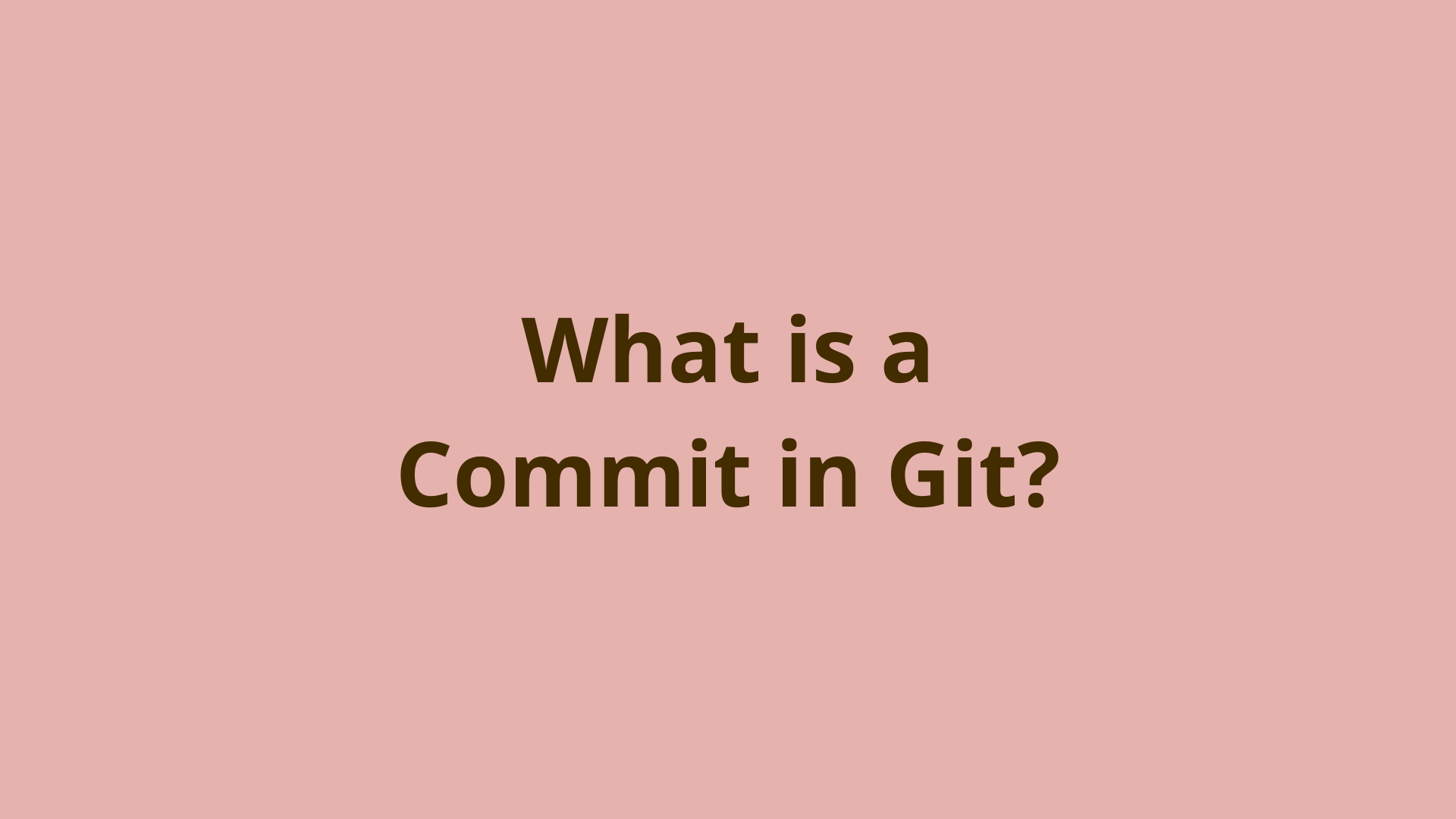 Commits are one of Git’s most important concepts, yet they are often misunderstood, or not fully understood.

In this article, we’ll explain everything you need to know about Git commits.

This is Part 3 of our series on Git’s main object types, which started with Part 1: What is a blob in Git? and continued with Part 2: What is a tree in Git?.

What is a Git commit?

A Git commit is a snapshot of your project’s working directory at a specific point in time, taken by a specific author.

Git keeps a record of all commits made in your project and uses this to build up a full history of every change ever made to each file.

This allows Git users to check out any previous version of the project using the command git checkout <commit-id>.

It also allows developers to keep track of exactly who made every change, down to each and every line of code. For example, the git blame command can be used to identify the most recent person who touched each line of a file.

What are committed parents?

Git commits use the notion of parents to link commits together in chains.

The initial commit in any Git repository is called the root commit and has no parents. This makes sense since it’s the very first one – there are no other existing commits that could be its parent.

However, all other commits after the initial commit have at least 1 parent. But what does it really mean for a commit to have a parent?

How can a commit have multiple parents?

When you use the git merge command to combine changes from multiple branches, Git will create a merge commit.

A merge commit can actually have 2 or more parents. This is because a merge commit combines changes from multiple previous commits which represent the state of the respective branches being merged.

A merge commit will store references to all of the parent commits being merged, which is usually 2. When Git merges changes from more than 2 branches, it’s called an octopus merge

Where are Git commits stored?

Like all other objects such as Git blobs and trees, commit objects are stored in Git’s repository, also known as the object database (or object store). This resides in your project root at the path .git/objects/.

What is the Git commit format?

Git commits are built up by Git’s code in a memory buffer in the following format:

This format starts with the object’s type, which is “commit”, followed by the size of the commit object in bytes.

Second is the SHA1 hash value of the root tree being committed. Just so you know, the root tree is built from the changed files that you added to the staging area, and it represents the set of files and folders being included in the commit.

Next comes a list of parent commit ID’s, which as previously mentioned is how a commit stores the references to its parents. This is what links commits together into chains we know as Git branches.

When does Git create commits?

Git can also create new commits when running Git merge. Specifically, this happens when merging to branches that have diverged – ie each branch has new commits that don’t exist on the other branch.

How are Git commits stored?

Git commits are stored the same way as all other Git objects such as blobs and trees. Git’s code builds up the commit in a memory buffer in the format shown above.

Next, the OpenSSL SHA library is used to calculate the SHA-1 hash of the commit data.

Then the Zlib library is used to compress the commit’s content for efficient storage, and the compressed commit is written to a new file in Git’s object database. The file is named based on the SHA-1 value that was calculated in the previous step.

No – Git won’t delete your commits unless they become orphaned, in which case they could eventually be cleaned up by Git’s garbage collection process.

An orphaned commit is one that is not reachable by any branch refs or tags. This can occur if you check out a non-tip commit on a branch which puts Git into a detached HEAD state. If you create a new commit at this point, and then abandon it without creating a new branch at that location, it will be orphaned.

Git doesn’t really re-use commits the way it re-uses other objects like blobs and trees. The reason is that a commit’s content has very time-specific and user-specific data, such as the date/time the commit was made, the author name/email, and the commit message.

Since the SHA-1 hash of the commit is based on all this unique data, along with the parent commit ID’s, it is pretty much impossible that a matching SHA-1 of a commit would be recreated in the future.

However, commits can be re-applied to different branches in various ways using commands like git rebase and git cherry-pick. Note that this will usually result in a new commit ID being generated for the commit.

How do I commit a file in Git?

You can commit a new untracked file in Git by using the git add and git commit commands as follows:

Let’s go through a quick example to illustrate the standard commit workflow:

Here are some useful and common command-line options and flags for the git commit command.

Set the commit message from the command line

The most commonly used option for the git commit command is the -m flag, which is used to specify a commit message on the command line as follows:

Note that it is very important to write clear, concise commit messages in a consistent style.

Automatically stage and commit changes in one command

Next, the -a flag can be used to automatically stage changed tracked files and commit them in a single step:

Note that this will only stage and commit tracked files with changes, including deleting a tracked file, but it will not stage a newly created untracked file.

Sometimes you’ll realize that after you commit, you made a typo or mistake in the commit message. You can quickly fix this using the --amend option, along with -m to specify the new commit message.

If Git allowed this for earlier commits before the branch tip, it would need to rebuild all subsequent commits since they all depend on each other.

What to do after you commit in Git

After you make a commit, you can feel free to continue your development on your current branch. If the feature you’re working on is complete, it may be time to merge the branch back into the development or main branch.

In addition, you probably want to use git push to upload your new commits to the remote repository. This will serve to backup your work and also share the commits with other collaborators on your project.

In this article, we discussed the basics of the commits in Git. We explained what a commit object is, where they are stored, and how they are formatted.

We also examined various ways to create commits and what to do after you create one.