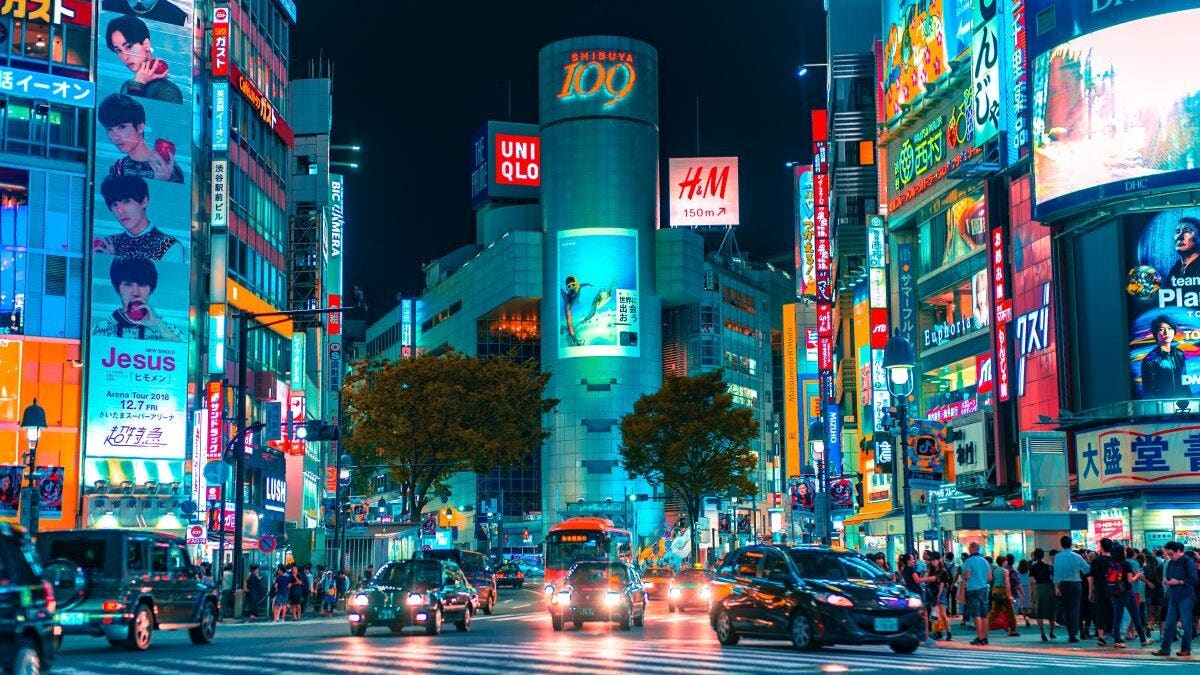 Japan remains an enigma for investors, with its glory days of the 1980s long eclipsed by three ‘lost decades’ of stagnant growth.

And, although Japanese stock markets have staged a recovery over the past 10 years, they remain well below their record high in 1989, when the Nikkei 225 index of leading Japanese companies fell a whisker short of 39,000.

However, with many global stock markets taking a battering, UK investors may be tempted to look east once again. The Nikkei 225 has dipped by only 4% over the past year, compared to a near 30% fall in the US Nasdaq index of tech stocks.

What’s more, the Japanese stock market is jam-packed with leviathans including Toyota, Panasonic, Sony and Uniqlo. Not only are they leading exporters on the global stage, but they’re also well-placed to tap into the domestic market of the third largest economy in the world.

We’re going to take a look at some of the benefits and risks of investing in Japan, together with the wider outlook for the sector.

Remember that investing is speculative, not suitable for everyone, and that it is possible to lose some or all of your money.

HHow has the sector performed?

After an impressive bull run in the 1980s, Japanese stock markets have since experienced a 30-year slide, with the Nikkei 225 losing 80% of its value by 2009.

This period came to be known as the ‘lost decades’ when the Japanese economy and stock markets went into a prolonged decline, as shown below:

However, there has since been a sustained recovery, with the Nikkei 225 increasing by over 230% in the last decade. That said, its current level of 28,000 remains some way below its 1989 high.

As a result, Japan has struggled to match the returns of other fund sectors, delivering a 5-year return of 12%, compared to 43% for the global sector, according to Trustnet:

“Ironically, as investors have gradually been selling their initial euphoria, corporate Japan has in fact been delivering, each year becoming a slightly better version of itself.”

However, Japan is not immune to the economic challenges facing its trading partners in Europe and the US. Josef Licsauer, investment analyst at Hargreaves Lansdown, explains: “Lingering effects from the pandemic, a weak yen and rising inflation are just some of the factors putting pressure on the country’s economy.

“Certain sectors are still holding up well. A weak yen is benefiting businesses relying on exports, including manufacturers and automotive businesses, and the rebound in tourism, following the lifted restrictions, has helped increase consumer spending.”

Morgan Bocchietti, portfolio manager at Charles Stanley, also points to a mixed picture for Japanese equities: “Household income has remained resilient throughout the pandemic and the savings ratio has remained high at 10%, resulting in a substantial spending potential.”

But he also identifies some headwinds for Japanese companies, including the cyclical exposure of large-cap companies and the sluggish reopening of the economy for smaller companies.

Why invest in Japan?

Japan is the third largest economy in the world, and home to global powerhouses such as Nintendo, Toshiba and Honda.

Mr. Bocchietti comments: “Japan is a proxy play on China without the political risks. It provides exposure to a developed market in Asia with world-leading companies.”

What’s more, Japanese equities have delivered a compound annual growth rate of 11% over the last decade, with the increase in the value of Nikkei 225 equaling that of the Nasdaq in the US over the same period.

M&G’s Mr. Vine comments: “Japan’s impressive earnings growth in the last decade was delivered in volatile macroeconomic conditions and in the context of relatively meagre revenue growth. Profit growth has been the result of deliberate efforts from the corporate sector to improve, to become more effective and more competitive.

“Margins of around 7% are well below those in the US and have significant scope to improve, in our view. The corporate landscape is littered with low hanging fruit, all offering material upside for profit margins and economic returns.”

Another potential opportunity is the limited research coverage of Japan relative to other markets such as the UK and US.

Mr. Licsauer comments: “It remains off the radar for many investors. However, there are also lesser-known businesses with the potential to become the household names of tomorrow.”

What are the drawbacks of investing in Japan?

Investors remain cautious about Japan due to its sluggish historical growth, false starts in terms of economic recovery, and political issues. Hargreaves Lansdown’s Mr Licsauer states: “Japan is known as a bit of a revolving door when it comes to Prime Ministers. Uncertainty and instability are traits investors and markets dislike.”

Japan also continues to face challenges in terms of its corporate culture. Diversity and independence at board level remains an issue, with Mr. Bocchietti commenting: “Japan is a laggard when it comes to social governance.” The average age of a CEO in Japan is over 60, the highest in the world, according to the Financial Times.

In contrast to the more entrepreneurial cultures of their Asian neighbors, Japanese companies have a more conservative attitude towards risk-taking, particularly in terms of taking on debt to finance expansion.

Mr. Vine states: “Japanese balance sheets remain awash with excess assets in the form of working capital, real estate, net cash and other miscellaneous items. Hundreds of businesses in Japan still have net cash accounting for at least 50% of their market cap.

“This excess capital is gradually being returned to shareholders or re-invested, with meaningful return implications.”

What are the options for investing in Japan?

There are a range of options available, from investing in individual Japanese companies to broader-based Japan funds.

Gemma Boothroyd, analyst at trading platform Freetrade, picks out video game giant Nintendo for investors considering adding Japanese shares to their portfolio: “As many US gaming companies have seen their share prices plummet as interest rates rise, Nintendo has managed to stand apart. Unlike other video game stocks like Roblox and Take-Two, Nintendo’s stock hasn’t taken a big post-Covid tumble.”

Ms. Boothroyd points to positive growth drivers including the popularity of its proprietary characters, such as Mario, together with the overall expansion of the gaming industry. However, she warns: “Its past success is no guarantee of its ability to keep innovating. Especially with many cloud-focused e-gaming firms hoping to kick console gaming to the kerb.”

While M&G’s Mr. Vine highlights that the US dollar market capitalizations of some of the global Japanese companies are at their lowest levels in several years. He commented: “Sony’s value today, in US dollar terms, is back to pre-COVID levels despite structurally higher earnings power today.

“The same is true for Fuji Filma company we believe has an extremely long runway for growth in its bio-pharma business, where it is a world leader.”

Some of the providers featured in our pick of the best trading trading platforms don’t offer the option of buying shares on Japanese stock markets. However, investors can still trade in Japanese shares through American Depository Receipts (ADRs) which are offered by many trading platforms. Investors will typically pay a share trading fee in addition to a foreign exchange fee as ADRs are denominated in US dollars.

ADRs represent a specified number of an overseas company’s shares and are denominated in US dollars, rather than Yen. They offer investors a way of investing in Japanese companies and can be traded on US stock markets, as with other shares.

Investing in Japanese funds provides investors with exposure to the sector through a ready-made, diversified portfolio of shares. Investors have the choice of actively-managed ‘stock-picking’ funds or passively-managed ‘tracker’ funds.

In the actively-managed category, Charles Stanley’s Morgan Bocchietti picks M&G Japan as it invests across all sizes of companies, including small and mid-cap sectors: “Manager Carl Vine has impressive depth and breadth of experience of investing in the region. M&G Japan offers a balanced style exposure and active management at a competitive price.”

The fund has been a top-quartile performer against its peers with a five-year return of 18%, according to Trustnet. It has also held up well in the last year, delivering a total return of 3% compared to a 10% fall in the broader Japan index.

iShares Japan Equity Index fund. The fund invests in each of the 500 companies in the FTSE Japan index, and has achieved a five-year return of 13%.

Mr. Licsauer comments: “It’s a good option for low-cost, broad exposure to the Japanese stock market. While it invests more in larger companies, it can invest in higher-risk smaller companies too.

“It also invests in a range of different sectors, including industrial, consumer discretionary, technology and healthcare.”

What’s the outlook for investing in Japan?

As with other stock markets, the outlook for Japanese equities is uncertain, particularly given the high cyclicality of demand for consumer goods produced by the Japanese blue-chips.

Although Japan’s economy is regaining its strength, its key trading partners in the US and Europe are facing high inflation and impending recessions, while China’s zero Covid-19 policy continues to hamper trade.

Mr. Vine comments: “While the bottom-up story in Japan is highly supportive, the global macro backdrop remains extremely challenging and as an export economy, Japan is not immune.”

Unlike its central bank counterparts in the US and UK, the Bank of Japan has continued with a loose monetary policy with very low interest rates. This has resulted in a sharp fall in the value of the yen against the dollar, hitting its lowest level in 30 years.

Mr. Licsauer comments: “Many expect this trend to continue going into 2023. This could limit interest from foreign investment and make everything in Japan more expensive. They are reliant on importing things like energy, so this is likely to have an impact.”

Charles Stanley’s Mr. Bocchietti shares a note of caution about current valuations of Japanese shares. He suggests that valuations may look cheap on a stand-alone basis but more expensive when compared to other stock markets where valuations have tumbled over the last year.

However, there are still some positive signs according to Mr. Vine, given the slow but steady change in corporate culture. He comments: “In turn, this is good for earnings growth, shareholder returns and valuations. None of this is in the price, we feel.”